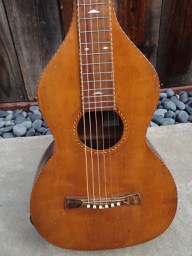 It’s A Beautiful Day was part of the 1960s San Francisco scene. The band was led by virtuoso violinist David LaFlamme. White Bird was their iconic masterpiece featuring a beautiful vocal duet with LaFlamme and Pattie Santos, as well as some jazzy interplay with the violin and guitar, played by Hal Wagenet.
This loose arrangement really just started when something got me interested in the opening pizzicato violin part, finding a big challenge in combining it with the bass vamp. Once I realized it might be possible, I figured I would go a little further and try to keep the rhythm going while adding both vocal parts. At that point I was committed and worked out ways to play the other sections, including four verses, three choruses, a bridge, the violin solo, the guitar solo, and even a combined interlude coming to a head before the last verse.
All of these parts open up lots of possibilities for improvisation and every time I play through it different things happen. This is my first take on video, shot about a week after starting the project.